The store will not work correctly in the case when cookies are disabled.

We continue to improve the site every day. If you are having issues, please reach out to us. In the past, you may have reached out to Scott directly. That is not the best way to get help. Please email orders@morriscostumes.com or call 800-522-2956. Scott is still leading the band, however, now we have an entire orchestra behind him.

IN-DG82783L
Join the other DIno Charge Rangers to battle it out and defeat the alien bounty hunter Sledge! Feel just like your favorite superhero when you dress up in the Green Power Ranger Dino Charge muscle jumpsuit and mask. It’s action time! The Power Rangers Dino Charge Green Ranger child costume includes a jumpsuit with muscle torso and arms, attached belt with a detachable belt buckle, detachable shoulder piece, and character half mask. Toy Weapon not included.

Log In To View Prices
Add To My Lists href="#" data-post='{"action":"https:\/\/www.morriscostumes.com\/catalog\/product_compare\/add\/","data":{"product":"572268","uenc":"aHR0cHM6Ly93d3cubW9ycmlzY29zdHVtZXMuY29tL2JveXMtZ3JlZW4tcmFuZ2VyLW11c2NsZS1kaW5vLWNoYXJnZS1jb3N0dW1lLWRnODI3ODNsLmh0bWw,"}}' data-role="add-to-links" class="action tocompare">Add to Compare
Skip to the end of the images gallery 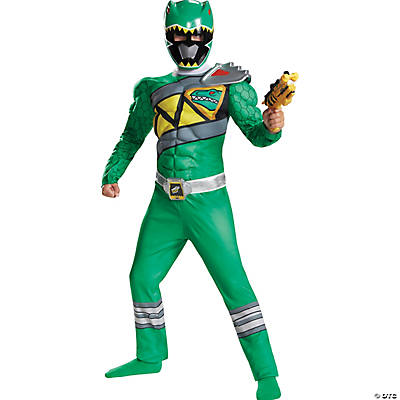